Don’t get me wrong, having HIV sucks. Use condoms, get tested, don’t get it. Following my diagnosis aged 31, I lost two years to depression. Plagued by doubts, my insecurities curdled into hatred for the women who rejected me once they found out my status. I felt poisonous, dirty and stained. I became a monster.

But while I used to think of HIV as a curse, after years of therapy and the reassurance of an ex-girlfriend, my sex life is better than ever. Before I was diagnosed, I took sex for granted. During my darkest days, I craved intimacy, but had no idea how to achieve it. Now, a new appreciation and humility has dawned on me; I enjoy sex more because I’ve learned its worth.

At first, I’d tell potential romantic partners about my status out of a sense of obligation, miserably stuttering, only to be greeted with eyes wide with fear. I mostly never heard from them again, and I don’t blame them; I wouldn’t have been interested in myself, either.

These days I try to show my dates that HIV is not a burden, but something that I’ve grown from. My viral load is undetectable, meaning I can’t infect anyone, although I’ll have to take medication for the rest of my life. Dealing with such a heavy subject with defiance, lightness and confidence is, I like to think, sexy. It also allows me to relieve people of their irrational fears of HIV. My status isn’t something to be ashamed of, which is why I’ve asked for my name to appear at the start of this piece. It’s time to end the stigma. 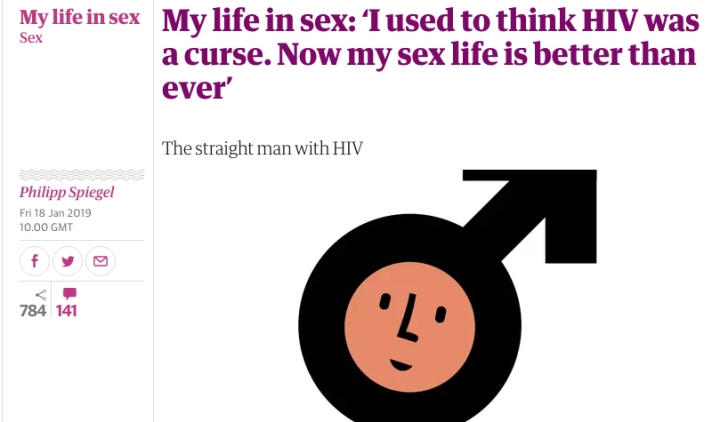